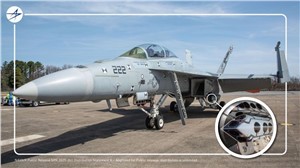 Lockheed Martin (NYSE: LMT), in conjunction with the U.S. Navy, completed its first flight test integrating Sniper® Advanced Targeting Pod (ATP) with the F/A-18E/F Super Hornet for the Kuwait Air Force. Sniper ATP will be located on the Weapon Station 5, an area on the aircraft where pods or weapons attach and is expected to be fielded with the aircraft in late 2023. This integration gives existing and future Super Hornet fleets the ability to add Sniper ATP’s precision targeting and surveillance capabilities, which are critical to pilot survivability.

"Integrating Sniper ATP onto Weapon Station 5, commonly known as the ‘cheek station,’ brings state-of-the-art tracking algorithms, two-way-data-link, and many other capabilities to the Kuwait F/A-18E/F crews that will positively impact the overall success of their missions,” said Kenen Nelson, director of Fixed Wing Sensor Programs at Lockheed Martin’s Missiles and Fire Control. “This also means that all F/A-18E/F customers will have the option of a reliable, easily maintainable and modern targeting pod.”

Currently, Sniper ATP flies on both the Kuwait F/A-18C/D and Canadian CF-18 Hornets. As the Kuwait Air Force transitions to the F/A-18E/F Super Hornet, they will benefit by receiving the new capabilities that the latest Sniper ATP configuration provides to the Super Hornet fleet. There are currently more than 27 countries and 15 different types of aircraft operating with the platform-agnostic Sniper ATP.