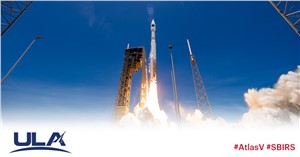 “Thank you to our mission partners for the tremendous teamwork as we processed and launched this asset that provides powerful surveillance and critical capabilities to protect our warfighters,” said Gary Wentz, ULA vice president of Government and Commercial Programs. “We are proud to work with the U.S. Space Force to continue to meet the national security needs of our country.”

The mission launched on an Atlas V 421 configuration rocket that included a 13.7-ft (4-m) Extra Extended Payload Fairing (XEPF). The Atlas booster for this mission was powered by the RD AMROSS RD-180 engine. Aerojet Rocketdyne provided the RL10C-1-1 engine for the Centaur upper stage and the two AJ-60A solid rocket boosters.

This was the 87th launch of the Atlas V rocket and the 72nd Atlas V to launch from Space Launch Complex-41 in Florida.