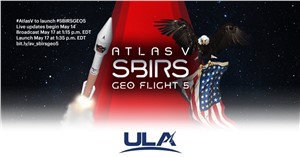 A United Launch Alliance (ULA) Atlas V rocket is in final preparations to launch the Space Based Infrared System Geosynchronous Earth Orbit (SBIRS GEO) Flight 5 mission for the U.S. Space Force’s Space and Missile Systems Center (SMC). The launch is on track for May 17 from Space Launch Complex-41 at Cape Canaveral Space Force Station. Launch is planned for 1:35 p.m. EDT. The live launch broadcast begins at 1:15 p.m. EDT on May 17 at www.ulalaunch.com.

“We take our role in national security very seriously and pride ourselves in being partners in space with the U.S. Space Force. We are launching critical capabilities for the warfighter and understand the need for reliability and consistency," said Gary Wentz, ULA vice president of Government and Commercial Programs. “This mission marks our 91st launch in support of national security space.  As we prepare to launch the fifth SBIRS mission, we thank our partners for their outstanding teamwork and collaboration.”

ULA has launched all SBIRS GEO satellites to date and will launch this fifth and the sixth satellite to complete the constellation. The SBIRS constellation, built by Lockheed Martin, consists of a network of GEO satellites and HEO payloads that provide persistent, infrared surveillance – as well as sophisticated ground control systems that manage the data – to support missile warning, missile defense, battlespace awareness and technical intelligence. Additionally, SMC’s Mission Manifest Office, in partnership with the United States Air Force Academy, will be flying the EZ-3 and EZ-4 flight systems on this mission.

The mission will launch on an Atlas V 421 configuration rocket, that includes a 13.7-ft (4-m) Extra Extended Payload Fairing (XEPF) and stands 194 ft. (59 meters) tall. The Atlas booster for this mission is powered by the RD AMROSS RD-180 engine. Aerojet Rocketdyne provided the RL10C-1-1 engine for the Centaur upper stage and the two AJ-60A solid rocket boosters.

This will be the 87th launch of the Atlas V rocket and the 72nd Atlas V to launch from Space Launch Complex-41 in Florida. To date ULA has launched 143 times with 100 percent mission success.