System sweeps ground radar emissions from high in the sky 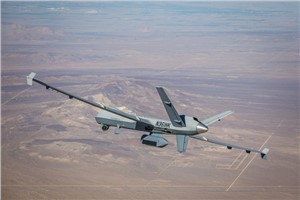 Military aviators call it electronic intelligence, or ELINT; it’s the practice of gathering information about adversary radars – where they are, what type of signal they emit – to avoid or defeat them.

Raytheon Deutschland GmbH, a subsidiary of Raytheon Intelligence & Space, has developed a digital, passive ELINT sensor called Advanced Radar Detection System, or ARDS, that can detect radar emissions on the ground – without itself emitting any signal and remaining undetected.

“Like a silent vacuum cleaner, ARDS sweeps up information about a broad range of radar and electromagnetic emitters,” said Christian Stenzel, a software engineer at Raytheon Deutschland. “The collected information is analyzed and becomes part of a military’s library of known threats. And it can be used by operators on future missions to counter those threats.”

The German-built ARDS works on both manned and unmanned aircraft, as well as ground or sea-based platforms. It can autonomously scan for emitters across the whole electromagnetic spectrum, without operator input, though operators can also control the system if they wish. For ELINT missions, the system can continuously save large amounts of data on a solid-state recorder, then upload it for post-mission analysis. ARDS can also interface with an aircraft’s downlink system to transmit the data to ground control stations in real time.

“In today’s environment, it’s very important to have the latest ELINT, both for immediate self-protection and for long-term strategic planning against adversaries,” said Stenzel. “To deal with evolving threats, the system’s firmware and software can be easily upgraded to add new detection algorithms and strategies.”

ARDS is built to withstand the vibration and other environmental factors typical of military aircraft. It was most recently tested as a pod on an MQ-9 Predator drone, but the system can also be integrated onto the platform itself, whether it’s a commercial or military aircraft.

ARDS builds on years of experience of the Emitter Location System, or ELS, on the German and Italian air forces’ Tornado electronic warfare aircraft. Using the latest digital components, ARDS significantly reduces hardware footprint when compared to the legacy ELS. Additionally, ARDS is what’s known as a “software-defined receiver,” meaning updates can be made through fast and simple software upgrades instead of time-consuming full hardware retrofits.

“We took our know-how of the digital ELS technology, and built a system that is much more capable and platform-agnostic,” said Sebastiaan Verton, Raytheon Deutschland’s chief executive. “And, the data that our system collects remains the ownership of the operator, as well as any new threat-countering techniques they develop or acquire.”

Even with its modern upgrades and ruggedized nature, most of ARDS’ computer processors are commercial off-the-shelf and readily available. Raytheon Deutschland has been maintaining the Tornado’s digital ELS using similar parts for over two decades, so keeping ARDS fine-tuned comes at a low-cost.

“We didn’t start from zero with ARDS,” said Ulrich Raitmeir, firmware development engineer at Raytheon Deutschland. “It’s a system with a proven track record that will keep advancing into the future. As the threats evolve, ARDS is evolving too.”