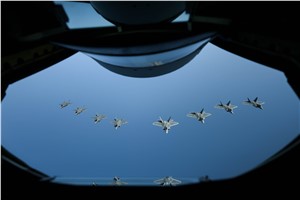 A contingent of Air National Guard and active-duty Airmen based out of Hawaii were deployed to Marine Corps Air Station Iwakuni, Japan to conduct Dynamic Force Employment operations, March 12 – April 5.

Throughout their time in Japan, the Airmen deployed from the 199th Fighter Squadron and 19th FS at Joint Base Pearl Harbor-Hickam, Hawaii, trained alongside their Marine and Koku-Jieitai, or Japan Air Self-Defense Force, counterparts in support of the National Defense Strategy’s effort in maintaining global peace and stability.

“This [deployment] allows our pilots and maintainers to train alongside one another, learn and apply best practices and ensure the joint force remains agile and responsive in the Pacific,” said Lt. Col. Brian Nash, F-22 Detachment commander, MCAS-Iwakuni. “This exercise demonstrates the Total Force’s ability to rapidly and unpredictably project combat power to a place and time of our choosing.”

DFE operations fall under the scope of Agile Combat Employment capabilities which allows Pacific Air Forces to continuously exercise ways to improve passive and active defense capabilities to ensure a competitive advantage and to protect assets and personnel in the future.

While conducting operations out of MCAS Iwakuni, Airmen got the chance to work hand-in-hand with their Marine counterparts, building their joint team capabilities.

“Having our fifth-generation counterparts here allowed us to share knowledge and practice tactics that will be relevant when we are called upon,” said a U.S. Marine Corps F-35B pilot. “The F-22 deployment to Iwakuni afforded resident squadrons valuable training opportunities and increased our ability to fight and win in this area of responsibility.”

Not only did the Airmen train and hone their Joint All Domain Command and Control skills, conducting combined exercises with their JASDF counterparts bolstered the interoperability of both militaries.

“Fighter units of our two countries have the capability to respond to any situation and to swiftly achieve their tactical goals,” said JASDF Lt. Col. Tamura Hidetoshi, 302nd Fighter Squadron commander. “Also, we are constantly enhancing these capabilities through bilateral training and we are determined to maintain the air power needed to ensure regional security. Having participated in this training, I am very convinced that Japan and the U.S. are absolutely unanimous in their intention and capabilities.”