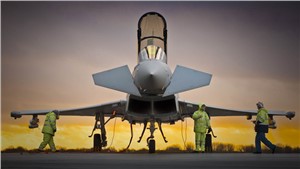 New roles have been created to provide support to the four Royal Air Force  Typhoon squadrons operating out of RAF Lossiemouth in Scotland, thanks to an upgraded maintenance role led by BAE Systems.

The 20 highly-skilled engineering roles will support the maintenance service and availability of the combat aircraft in north-east Scotland; one of two RAF Quick Reaction Alert (QRA) stations which protect UK airspace around the clock.

The new arrangement will ensure a dedicated and local engineering team are on hand to support critical operations based permanently at RAF Lossiemouth, removing the need for a maintenance team to travel from RAF Coningsby in Lincolnshire.

It will also free up RAF personnel to perform other critical tasks and enhance the maintenance capability on the frontline.

John Bromehead, General Manager, RAF Lossiemouth, BAE Systems, said:
“We are very proud of our role not only as manufacturer of the Typhoon aircraft but in the technical and engineering expertise we deliver, to ensure the aircraft’s operational readiness.
"The Typhoon aircraft help to safeguard the UK’s national security and economic interests and the new roles created in Scotland will ensure we provide enhanced support to those who defend our skies.”

The contract, designed to deliver value for money to the RAF, has delivered more than £500m of savings since 2016, which has been reinvested in further capability enhancements to the aircraft.

Typhoon continues to be one of the world’s most successful combat military aircraft and the backbone of European defence, underpinning jobs, security, technological development and strategically important international relationships.

Tell a friend:
20 New Jobs Created to Support the Delivery of Frontline Typhoon Squadrons in Scotland