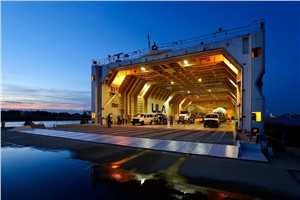 At dawn this morning, technicians boarded the vessel and went to work releasing the restraints that kept the flight hardware secure inside RocketShip's cargo hold during the trip. At 8 a.m. EDT, Centaur emerged from the ship and headed to the ULA facility for final preparations.

The Atlas booster stage followed behind. A transport truck pulled the stage directly to the ordnance bay at the Atlas Spaceflight Operations Center (ASOC) where it will undergo standard activities before the 107-foot-long stage can go vertical for launch processing.

Built by Lockheed Martin, SBIRS GEO-5 will join a constellation of satellites with powerful scanning and staring sensors that provides continuous global surveillance to detect missile launches and provide early warning for the Unites States and its allies.

This will be the first launch for a satellite built on the company’s modernized LM 2100 Combat Bus™ – an enhanced space vehicle that provides even greater resiliency and cyber-hardening against growing threats, as well as improved spacecraft power, propulsion and electronics.

Atlas V is the exclusive launch vehicle of choice for the SBIRS GEO spacecraft series. The rocket successfully launched the first in 2011, second in 2013, third in 2017 and fourth in 2018. Atlas V is also slated to launch SBIRS GEO-6 in 2022.

The SBIRS GEO Flight 5 launch will use an Atlas V 421 variant, with a four-meter-diameter (13.7-foot) payload fairing, two AJ-60 solid rocket boosters and a Centaur equipped with a single RL10C-1-1 cryogenic engine.