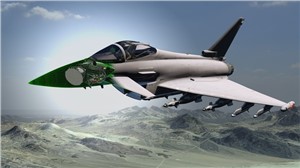 Finland has been invited to have a role in the future capability development for an advanced new radar for Eurofighter which will secure the skies over Europe for decades to come.

The European consortium, backed by the Germany, Italy, Spain and the UK, is also developing 70 packages of work which will create significant numbers of high-quality, long-term jobs with more than 100 Finnish companies.

Speaking at a virtual briefing, Mr Quin spoke of the UK and Finland’s shared defence and security threats from Russia and other “non-state adversaries” and confirmed the UK’s commitment to strengthening its Joint Expeditionary Force, where it partners with Finland.

He added: “I have invited Finland to join the UK’s ECRS Mk2 radar programme, bringing Finnish expertise into its future development for the benefit of both our countries.
“I am not alone in wanting Finnish expertise to be part of developing our future capability, the other Eurofighter partner nations are committed to making sure Finland is part of the decision-making.
“As we look forward to Europe leaving behind the challenges of the pandemic, let’s focus our investment in European technology and capability that gives us the military edge we need and supports European jobs.”

Air Chief Marshal Sir Michael Wigston, Chief of Air Staff, Royal Air Force, added that Finland was being offered “a long term partnership with the RAF” as part of the Eurofighter offer.

He added: "For Finland, Eurofighter would be a gateway in to Europe's defence and aerospace programmes, defending our skies and deterring our potential adversaries in to the future."

Andrea Thompson, Managing Director - Europe & International, BAE Systems - Air, said the industry partners behind the Eurofighter offer were in advanced talks with Finnish industry about more than 70 packages of work.

She said: “More than 100 Finnish companies will benefit from proposed packages of work, which will deliver significant numbers of jobs.
"We will ensure Finnish industry benefits from the creation of highly-skilled jobs that are needed to build, maintain and upgrade the aircraft over many decades.
"This will deliver high-quality, long-term jobs which will stay in Finland for as long as Eurofighter will remain in service in Finland."

Speaking on behalf of the EUROJET consortium, which produces the EJ200 engine for Eurofighter, Alex Zino, Executive Vice President of Business Development and Future Programmes for Rolls-Royce Defence, said: “As part of our offer, Finnish Defence personnel and strategic industry partners will be given the sovereign capability and skills, as well as operational knowledge on the engine, in order to lead on all activities where EUROJET will become a supplier to Finland.
“This transfer will result in a combined workload of approximately 1.5 million man hours over 40 years.”