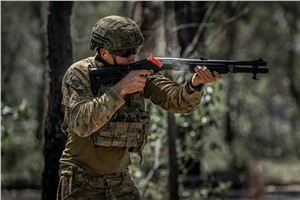 Soldiers from the 6th Battalion, Royal Australian Regiment have qualified on the Remington 870 shotgun, which is a key weapon in the urban battlespace.

Sergeant Ryleigh Egan was the lead instructor for the shotgun qualification course in the Greenbank Military Training Area.

“The Remington 870 can produce excellent lethality in urban operations, particularly with room clearances and the ballistic method of entry,” he said.

Sergeant Egan said the Delta Company soldiers were enthusiastic about learning to use a different weapon, and adding to their overall skillsets as professional soldiers.

“We have a very young company and they are keen and willing to better their personal skills, so when the Remington was offered as a course, they were very keen to get hands-on and practise new forms of combat.”

Sergeant Egan said the 6th Battalion, Royal Australian Regiment was working on modernising its training as the battlespace evolved and urban operations become more of a focus for the Australian Army.

“The end goal is to have the vast majority of Delta Company and possibly the battalion qualified in the weapon, allowing soldiers to participate in further courses such as the Light Explosive Urban Breaching Course,” Sergeant Egan said.

“Ultimately we are trying to increase the company's lethality in all combat scenarios.”