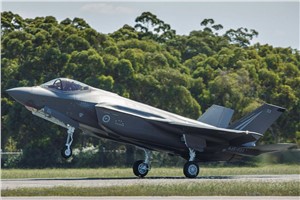 Air Force has now received 33 of the planned 72 aircraft.

The new aircraft are the first to join the fleet since the F-35A reached initial operational capability in December 2020.

They completed a three-day journey from the United States as part of Exercise Lightning Ferry 21-1.

“Increasing our fleet size will further advance Air Force’s proficiency in combat, strike and offensive air support, while enabling 2OCU to deliver the first operational conversion course on the F-35A aircraft in Australia.”

They are expected to graduate in July.

During Exercise Lightning Ferry 21-1, the three F-35As travelled from Luke Air Force Base, Arizona, to RAAF Base Williamtown via Hickam Air Force Base in Hawaii.

They were supported throughout the 12,700-kilometre journey by two KC-30A multi-role tanker transport aircraft from No. 33 Squadron and a C-17A Globemaster from No 36 Squadron.

Wing Commander Sander said the delivery of the F-35As demonstrated how Air Force operated as a coordinated team, and engaged with international partners.

“The transit of the F-35A aircraft from Luke Air Force Base to RAAF Base Williamtown took three days; however, the exercise was a two-week activity requiring support from across our air forces,” Wing Commander Jordon Sander said.

“The integration of people and platforms required for the ferry of the aircraft is critical in achieving the success of the F-35A.

“We wouldn’t have been able to successfully ferry the aircraft to Australia if it wasn’t for the air-to-air refuelling and airlift capabilities of our Air Mobility Group aircraft.

“Australia will continue engaging with and strengthening our longstanding relationship with the United States Air Force as more F-35A aircraft are delivered and we continue to advance the F-35A capability.”