The U.S. Navy and the Japan Maritime Self-Defense Force (JMSDF), began Mine Warfare Exercise (MIWEX) 1JA 2021 off the coast of southwestern Japan, Jan. 28 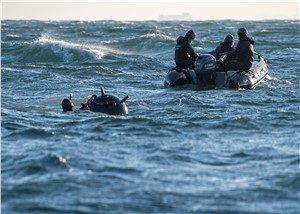 MIWEX 1JA is part of an annual series of exercises between the U.S. Navy and Japan Maritime Self-Defense Force (JMSDF) designed to increase proficiency in mine countermeasure operations between the two forces.

Capt. Derek Brady, the commodore of Mine Countermeasures Squadron Seven, always looks forward to working with the JMSDF. “While it is always good any time we are able to practice interoperability with our allies, the true benefit of this exercise is the opportunity to employ new techniques and equipment like the Expeditionary Mine Countermeasures (ExMCM) Company, alongside more traditional methods,” he said. “The experience gained helps us better map the future for mine warfare in the Pacific.”

During the nine-day exercise, participants work together to clear a route for ships through a simulated minefield using unit-level mine warfare tactics to include mine hunting, detection, and neutralization.

"Mine Warfare Exercises like 1JA reinforce our partnership and interoperability with the highly skilled Japan Maritime Self-Defense Force," said Lt. Nick Woods, the officer in charge of Expeditionary Mine Countermeasures Company 1-1. "Simultaneously, they allow our ExMCM forces to hone the edge by rapidly deploying a scaled force package to a vessel of opportunity and conducting full-spectrum, detect-to-engage mine warfare. The exercise also affords us an excellent opportunity to employ our platform-agnostic unmanned systems throughout the region, ensuring we're prepared to operate in any environment. In all, it is truly a pleasure to work with our Japanese hosts to remain prepared to clear waterways for freedom of navigation and maritime maneuvers."

JMSDF Mine Warfare Force and Mine Countermeasures Squadron 7 commanders work together throughout the exercise to direct mine hunting tasks for U.S. and JMSDF units. This training allows all the units to practice communicating and operating in a combined environment and learn to maximize their cumulative mine hunting capability.

“This is our second bilateral mine sweeping exercise conducted in Ise Bay. We are pleased to conduct this exercise by taking sufficient countermeasures against COVID-19 despite the state of emergency in Japan. This exercise follows the ones held in Mutsu Bay and Hyuga-nada Sea last year,” said Rear Adm. Fukuda Tatsuya, Commander, Mine Warfare Force. “The purpose of the exercise is to further strengthen collaboration with the U.S. Navy and increase proficiency in mine countermeasure operations of the JMSDF. Cooperation between the JMSDF and the U.S. Navy in the field of mine warfare is essential to ensure the safety of shipping, and I am confident that the improved mine warfare capabilities and enhanced cooperation between us through this exercise will contribute to the stability of the Indo-Pacific region. I hope that participants from the JMSDF and the U.S. Navy will achieve desired results in this exercise.”

U.S. Navy Explosive Ordnance Disposal (EOD) technicians, assigned to expeditionary mine countermeasures capability of Task Force 75 are embarked on JMSDF Uraga-class mine warfare command ship JS Uraga (MST 463), working alongside members of the JMSDF to increase interoperability and proficiency in mine warfare operations.

CTF 75 is U.S. 7th Fleet's primary expeditionary task force and is responsible for the planning and execution of maritime security operations, explosive ordnance disposal, diving, engineering and construction, and underwater construction throughout the Indo-Pacific region.