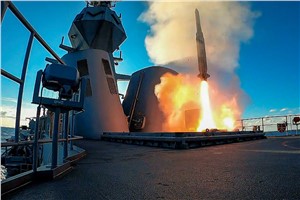 With ranges hundreds of kilometres greater than the current inventory, new anti-ship and surface-to-air missiles are being considered as part of a $1 billion investment into advanced guided weapons for Navy under Project SEA 1300 Phase 1.

“Guided weapons are an integral part of the ADF’s ability to ensure military advantage by holding adversary forces and infrastructure at risk at greater distances from Australia,” he said.

The project combines multiple weapons development and acquisition activities and will be synchronised with naval shipbuilding and combat system development programs being delivered by Australia’s skilled combat system enterprise workforce.

The Standard Missile family of weapons integrates seamlessly into the Aegis combat system, the backbone of Navy’s integrated air and missile defence capability.

Rear Admiral Quinn said compatibility of weapons and systems across the Joint Force and with Australia’s allies was the key focus of the project.

“Coordinating these programs ensures our Navy will remain a lethal and highly responsive deterrent as we keep pace with changes to threats and technology,” Rear Admiral Quinn said.

The commitment announced by Defence Minister Linda Reynolds on January 25 is part of a planned investment of up to $24 billion over the decade.

“The planned acquisitions will build a lethal and highly responsive Navy for decades to come,” Senator Reynolds said.

"These new capabilities will provide a strong, credible deterrent that will ensure stability and security in the region.

Defence is planning for the introduction of new long-range air defence weapons, replacement of the current anti-ship missile with an advanced maritime and land strike capability and development of the next generation light weight torpedo through an armaments cooperation program with the United States Navy.

While no down selection of a long range anti-ship missile has yet been made, the first weapon to be introduced will be the Evolved Sea Sparrow Missile (ESSM) Block 2, which is being developed in conjunction with Australia’s allies through the NATO Sea Sparrow Consortium.

With production having commenced in 2019, the ESSM Block 2 is expected to be initially employed in the Anzac-class frigate in the next few years.