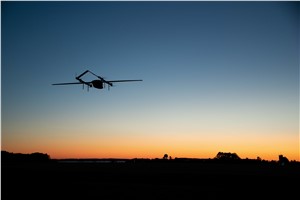 “The Blue Water logistics UAS will be further developed and tested by the Navy, for the Navy,” said NAWCAD Commander Rear Adm. John Lemmon. “NAWCAD has organic talent and facilities you can’t find anywhere else. Combined with increased acquisition freedom granted by Congress, this effort shows how we’re doing business differently.”

“This requirement is unlike other cargo requirements that online retailers like Amazon are exploring,” said Blue Water’s project lead, Bill Macchione. “Naval cargo transport requires vehicles that can successfully operate through difficult environments that include heavy winds, open water and pitching vessels at sea.”

Historic data from Navy casualty reports show that warships that move to non-mission capable or partially mission capable status often do so due to logistics-related issues like electronics parts or assemblies – 90% of which are logistical deliveries weighing less than 50 pounds. Currently, tactical aircraft like the H-60 helicopter and V-22 tilt-rotor aircraft fly these missions.

Recognizing the cost and inefficiency of using these aircraft in missions that could be completed by Group-3 size UAS, MSC tapped NAWCAD to demonstrate an ability for an autonomous vehicle to fly these logistics missions.

The warfare center solicited industry to demonstrate potentially viable platforms that existed commercially. Industry was required to prove its UAV could autonomously transport a 20-pound payload to a moving ship 25 miles away without refueling. Of over 65 UAS platforms that were analyzed, two systems were technically advanced enough to partially meet the difficult requirements.

“We planned the demo during NAWCAD’s first Advanced Naval Technology Test Exercise in 2019 because we wanted to test the systems in a realistic and simulated forward-deployed environment,” said Macchione. “NAWCAD engineers and pilots observed and provided honest naval assessment based on which system was easiest to operate and maintain, had solid design, and required least modification for the mission.”

Based on the systems' performance at the Pax River demonstration in 2019, NAWCAD selected the Group-3 Skyways platform as the Texas-based company’s small UAS has the necessary size, payload capacity, and range potential to function in a maritime environment and allow incremental test by NAWCAD with supporting technologies that might ultimately meet the needs of MSC.

The platform’s arrival to NAWCAD’s unmanned Air Test and Evaluation Squadron (UX) 24 is the start of civilian and military training, and subsequent system development will better meet MSC’s requirement.

“NAWCAD intends to work with the contractor to create a better fit with the environment where it could potentially operate,” said Macchione. “We’re excited to get to work on such innovations as folding wings for better handling and ship storage, a dual propulsion system that runs on both electricity and JP-5 [fuel], an internal versus external cargo capacity, and an automatic dependent surveillance broadcast identification system.”

Once NAWCAD fine-tunes the system, Blue Water will head to the Atlantic for experimentation with the fleet through most of 2021.

“Results of the technical feasibility and technology demonstration efforts conducted will be shared and used to discuss transition to support fleet initiatives,” said James Tomasic, Blue Water’s co-lead and experimentation engineer. “Culmination of the effort with the Fleet during a Naval Warfare Development Command experiment later this year will provide pertinent information for the Office of the Chief of Naval Operations, which determines requirements and future force structures for the Department of the Navy.”