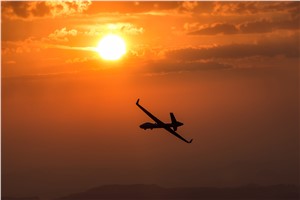 The State Department has made a determination approving a possible Foreign Military Sale to the Government of the United Arab Emirates of MQ-9B Remotely Piloted Aircraft and related equipment for an estimated cost of $2.97 billion. The Defense Security Cooperation Agency delivered the required certification notifying Congress of this possible sale today.

This proposed sale will support the foreign policy and national security of the United States by helping to improve the security of an important regional partner. The UAE has been, and continues to be, a vital U.S. partner for political stability and economic progress in the Middle East.

The proposed sale will improve the UAE’s capability to meet current and future threats by providing timely Intelligence, Surveillance, and Reconnaissance (ISR), target acquisition, locate submarines and counter-land and counter-surface sea capabilities for its security and defense. The capability is a deterrent to regional threats and strengthens its self-defense. The UAE has demonstrated a commitment to modernizing its military and will have no difficulty absorbing these articles into its armed forces.

The proposed sale of this equipment and support will alter the basic military balance in the Arabian Gulf region by expanding the release of a weapons ready Remotely Piloted Aircraft to the region.

The principal contractors will be General Atomic Aeronautical Systems, San Diego, CA; Lockheed Martin, Bethesda, MD; Raytheon, Waltham, MA; L3Harris, Inc., Melbourne, FL; and Leonardo SpA, Rome, Italy. There are no known offset agreements proposed in connection with this potential sale. However, the purchaser typically requests offsets. Any offset agreements will be defined in negotiations between the purchaser and the contractor(s).

Implementation of this proposed sale will not require the assignment of any additional U.S. Government or contractor representatives outside the United States.