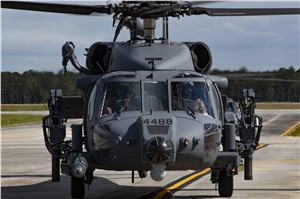 Aircrew from the 41st Rescue Squadron out of Moody AFB and the 413th Flight Test Squadron and 88th Test and Evaluation Squadron, both at Duke Field, Florida, flew the aircraft from Lockheed Martin’s Sikorsky Training Academy.

The primary mission of the HH-60W helicopter will be conducting day or night operations into hostile environments to recover isolated personnel during war. The platform will also be tasked to perform military operations other than war, including civil search and rescue, medical evacuation, disaster response, humanitarian assistance, security cooperation/aviation advisory, NASA space-flight support, and rescue command and control.

The delivery of the new model is significant to the personnel recovery mission as it begins the transition from the predecessor, the HH-60G Pave Hawk model, which has been flown for more than 26 years. The Air Force will continue to utilize the HH-60G model until the transition is complete.