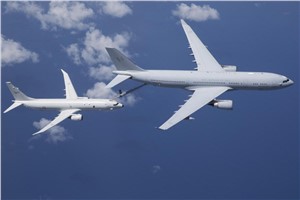 The RAAF P-8A Poseidon fleet has taken a step towards full operational capability with one of the surveillance aircraft completing the first air-to-air refuelling with a KC-30A multi-role tanker transport.

The two aircraft undertook seven refuelling flights from September 22 to October 1, with the KC-30A leaving its home base of RAAF Amberley and meeting up with the P-8A Poseidon from RAAF Base Edinburgh’s No. 92 Wing.

Using the 11-metre advanced refuelling boom system mounted on the KC-30A, the refuelling contact between the two aircraft was made in the designated training airspace off the coast of Queensland.

Captain of the P-8A Poseidon Squadron Leader Chris Godfrey said extensive planning was the key to the success of the missions.

“The execution of air-to-air refuelling requires extensive planning and training in both the simulator and airborne environment,” Squadron Leader Godfrey said.

“This included rigorous training scenarios to ensure we were ready for the demanding aerial refuelling flights.”

During the refuelling missions, crews of both aircraft had to ensure the connections between the aircraft were precise to allow for the transfer of fuel.

On the ground, communications between No. 92 Wing and No. 33 Squadron aircrew also was key to the success of the flights.

“Fundamentally, it’s a team effort both in the air and on the ground,” Squadron Leader Godfrey said.

“This included our No. 11 Squadron maintenance personnel who worked long hours over the past couple of months to ensure the serviceability of the aircraft for the aerial refuelling flights.

The execution of air-to-air refuelling requires extensive planning and training in both the simulator and airborne environment.

“I was incredibly proud to play a part in the mission and operate within such an effective and focused team.”

“The missions represent a significant achievement for the RAAF P-8A fleet on our path to final operational capability,” Group Captain Grime said.

“It enhances the existing operational effectiveness of the aircraft’s long-range surveillance capabilities, extending the endurance and radius of action of the platform.”

The collaborative efforts of No. 92 and 86 Wing played a significant role in the mission’s success.

“The strong partnership with No. 33 Squadron’s KC-30A team demonstrates our ability to integrate fifth-generation capabilities and strengthens our air power contribution for the joint force,” Group Captain John Grime said.

“Adding RAAF’s P-8A Poseidon to our scope of support reinforces the value of the KC-30A in the battlespace,” Group Captain Bull said.

“It delivers an extremely agile capability across multiple platforms in support of operations at home and abroad.”