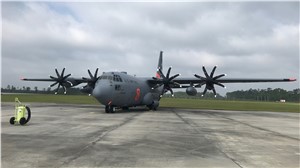 With its eight composite blades and digital Electronic Propeller Control System (EPCS), NP2000 offers a number of benefits compared to legacy systems including: a 20 percent thrust increase during take-off, a 20db sound reduction in the cockpit and a 50 percent reduction in maintenance man-hours. Along with C-130 variants, NP2000 has been in service with U.S. and international customers on the Northrop Grumman E-2 and C-2 since 2004, and is planned for use on the Lockheed Martin P-3.

With the receipt of this new order, bringing the total order to 55 C-130H aircraft to date, Collins Aerospace continues to make progress toward USAF’s plan to retrofit approximately 160 C-130H aircraft with NP2000. In addition to the new order, Collins Aerospace earned the system’s C-130H Air Worthiness Certification from USAF and completed the first formal combined NP2000/EPCS installation on a USAF C-130H in April.