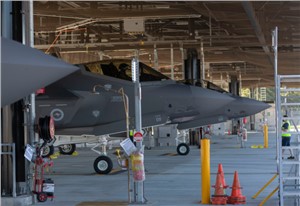 The Australian arm of Collins Aerospace has delivered the 1000th 360-degree situational awareness system for the global F-35 Joint Strike Fighter Program to the United States, marking a significant milestone for the program.

The Electro-Optical Distributed Aperture System (EODAS) optical assembly is the eyes of the aircraft, providing the pilot with a 360-degree spherical view of their surroundings.

“The F-35s are the most advanced, multi-role stealth fighter in the world which will deliver next generation capability benefits and provide a major boost to air combat capability,” Minister Reynolds said.

“The EODAS optical assembly is critical to detecting threats, by warning the pilot of incoming aircraft and missile threats and providing day/night vision and fire control capability.

“It collects real-time, high-resolution imagery from six infra-red cameras mounted around the F-35 and sends it to the pilot’s helmet-mounted display.”

Australian industry is manufacturing parts fitted to every F-35A in production globally.

Its involvement in production and sustainment is expected to exceed $2 billion by the end of 2023.

“Collins Aerospace (Australia) has already manufactured an estimated 50 per cent of the optical assemblies for Northrop Grumman Corporation this year.

“The Australian arm of Collins Aerospace has also opened a new facility to perform Maintenance, Repair, Overhaul and Upgrade, as well as specialised component manufacturing, for the F-35 flight simulators’ ProSimTM projectors.

“This facility in Lane Cove, Sydney will lead to the creation of up to eight new full-time jobs and a multi-million dollar revenue stream.”

The company is also establishing a component manufacturing capability at its Lane Cove facility for the Liquid Crystal on Silicon Panel Optical Assembly.

Collins Aerospace (Australia) is being supported in this endeavour by a New Air Combat Capability – Industry Support Program grant valued at $976,874.

The grants provide funding for Australian businesses and research organisations to help them win work in the F-35 program.