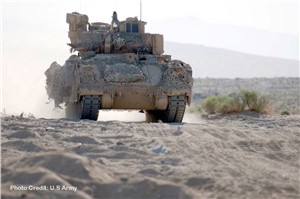 Elbit Systems of America was awarded an Indefinite Delivery/Indefinite Quantity ("ID/IQ") contract by the Defense Logistics Agency Land based in Warren, Michigan to supply the U.S. Army with gunner hand stations, commander hand stations and circuit cards for the Bradley Infantry Fighting Vehicle ("IFV"). The contract, with a maximum value of up to $79 million, will be performed over a 5-year period. An initial purchase order of $26 million under the ID/IQ contract, followed by a second purchase order of $12 million, have been issued to be executed over a three-year period.

The gunner hand stations allow Soldiers to target and fire accurately and work in collaboration with the commander hand stations, which are used to drive the vehicle's turret and initiate control signals to the turret fire control systems. The circuit cards provide processing and power supply to the hand station units, which will replace damaged equipment from active units.

"Our team is proud to offer critical ground vehicle modernization solutions for the U.S. Army to ensure accuracy and lethality for Soldiers," said Raanan Horowitz, President and CEO of Elbit Systems of America. "Receiving this task order to support the Bradley Infantry Fighting Vehicle means U.S. ground forces remain equipped at all times with the very best technology to complete their missions."

"We have a long history of providing systems that meet the rigorous demands of the U.S. Army," said Ridge Sower, Vice President of Ground Combat and Precision Targeting at Elbit Systems of America. "These gunner and commander hand stations and associated spare parts will increase Soldiers' operational effectiveness, while keeping them safe."

For the U.S. Army's first order under this ID/IQ, Elbit Systems of America has production of the Bradley components planned through 2024.