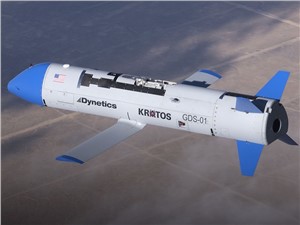 The Gremlins second flight test, completed in just over two hours, was conducted at Dugway Proving Ground near Salt Lake City, Utah. The ultimate program objective is to demonstrate aerial launch and recovery of multiple low-cost reusable UASs. For this second flight test, the entirety of the Gremlins Demonstration System – including GAVs, the launch and recovery system, airborne operator control station, and Gremlins Command, Control, and Communications system - was successfully demonstrated. A key highlight of this event included both formation flight with the C-130 aircraft and a second parachute recovery.

“We have taken a major step forward towards accomplishing airborne recovery, and we are ever so close to achieving it,” said Tim Keeter, program manager for the Dynetics Gremlins team. “Our second GAV flown to date performed very well, which increases our confidence in the X-61A. And for the first time, we rendezvoused and flew in close formation with the recovery C-130 multiple times using the Gremlins Autonomous Docking System (GADS). Multiple captive tests were also conducted for the first time, with actively-controlled GAVs attached to the stabilized towed docking device. This demonstrated the ability of the recovery system to safely reel in and stow GAVs once they have docked. The data collected from these tests will provide the necessary information to perform final tuning of GADS.”

Steve Fendley, President of Kratos Unmanned Systems Division, said, “We are truly thrilled about this milestone achievement in partnership with Dynetics and look forward to the remaining flight tests of the system in the coming months as it nears transition. As we continue demonstrating these advances, the reality of an airborne aircraft carrier gets closer; we are proud to be a part of it and support Dynetics and keen to build production Gremlin Air Vehicles to support the range of applications this capability enables.”

Eric DeMarco, President and CEO of Kratos, said, “We look at Kratos’ partnership with Dynetics as truly strategic in nature, and the Gremlins program is representative of the highly competitive, industry leading, technologically advanced affordable solutions we can provide to our customers. We are truly excited about the future prospects for Gremlins and the capability the entire Gremlins Program Team is bringing forward.”