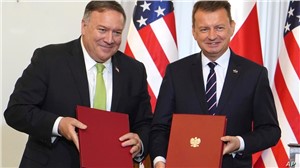 The deal supplements an existing NATO Status of Forces Agreement, and it also allows U.S. forces access to additional military installations in Poland.

About 4,500 U.S. troops are currently based in Poland and about 1,000 will be added, as both counties agreed and announced last year.

Last July, the Pentagon said that about 12,000 troops would be withdrawn from Germany, from which some 5,600 would be stationed in other countries in Europe, including Poland.

The relocation of U.S. troops is in line with Trump's demand to reduce American forces in Germany.

Pompeo and Morawiecki discussed a new draft bilateral agreement to cooperate in the development of Poland's civil nuclear power program, which the two countries initialed this week.

Besides defense cooperation, Pompeo and Morawiecki discussed the support for the people of Belarus, measures to recover from the COVID-19 pandemic, securing 5G networks, and improving regional energy and infrastructure through the Three Seas Initiative.

Pompeo said Saturday at a news conference in Warsaw that the U.S. is following developments “closely” in Belarus after last weekend’s disputed election and a clampdown on subsequent protests.

The U.S. effort to extend the embargo failed because of opposition from China and Russia, and a decision by Britain, France, Germany and eight other council members to abstain from voting.

In a statement Saturday, Pompeo lauded Lithuania for designating Hezbollah as a terrorist group and prohibiting its affiliates from entering its territory.

“Lithuania’s decisive action, which follows Germany’s own ban on Hezbollah on April 20, recognizes there is no distinction between Hizballah’s so-called ‘military’ and ‘political’ wings,” the statement said.

Poland was the last leg of Pompeo’s four-nation tour of eastern and central Europe, during which he visited the Czech Republic, Slovenia and Austria, and met with the countries’ leaders.