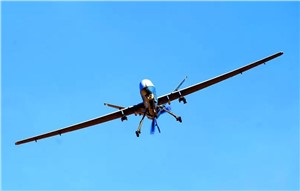 The UK’s Maritime and Coastguard Agency (MCA) awarded an Israeli defence company with a contract worth almost £1 million to demonstrate and develop unmanned aerial vehicles – or drones – to enhance coastal surveillance operations.

Elbit Systems UK, a subsidiary of Haifa-based Elbit Systems, was awarded the £990,000 contract in February 2020, but the contract summary was only published on a government website in July.

According to the Invitation to Tender, the MCA was looking to “assess the potential use of UAV to augment current and future aerial surveillance capability by reducing, enhancing or replacing existing delivery methods”. The contractor that secured the deal would have to work out and implement a flying programme to showcase how drones could be deployed in various scenarios – including search for missing people or vessels, surveillance, and search for a missing person both on the ground and at sea.

The UK has grown increasingly keen on using drones to keep watch on its coasts, as media attention around the arrival of small groups of migrants on dinghies on British coasts has reached fever pitch. The home secretary Priti Patel has called on France and the rest of the European Union to make sure that migrants do not try to sail to the UK.

“When the British people say they want to take back control of our borders – this is exactly what they mean,” Patel wrote in a tweet, conflating the Brexit referendum with the quite distinct issue of asylum seekers. The number of asylum seekers travelling by boat to the UK is small: last year, about 1,800 people made it to the country this way. Still, the number has been steadily increasing in recent years, prompting the government to look for technological solutions to stem it. Enter the drones.

In a statement published on the company’s website in February, Elbit Systems UK’s CEO Martin Fausset said that the company “look[ed] forward to providing the best possible support for the lifesaving work of the MCA”.

Fausset underlined that one of the drones involved in the scheme would be the Hermes 900, “a long-range maritime surveillance system tailored for littoral and blue water operations,” which “enables persistent monitoring of vast swathes of sea and long coastlines with effective advanced search capabilities.”

First introduced in 2012, the Hermes 900 has an endurance of over 30 hours, a feature that has made it popular in several countries – including the Philippines, Mexico, Iceland, and Switzerland among others. The Israeli Air Force started using Hermes 900 – pimped out with “specialist payloads” and rebranded “Star” – back in 2014. In late 2018, the European Union announced that it would deploy Elbit’s drones for maritime surveillance operations.

Both the MCA and the Home Office declined to comment on whether Hermes 900 drones are currently being used to monitor the UK coasts. Elbit Systems UK did not reply to a request for comment.

In January 2020, WIRED reported that a surveillance drone belonging to Portuguese company Tekever – which had recently signed a contract with the UK Ministry of Defence – was hovering for hours over the English Channel, in what appeared to be a patrolling operation.

Back then the Home Office declined to comment on the details of the operation, but stressed that the UK was working with France and other countries and resorting to technologies including drones to stem illegal crossings. Over the last few days, Tekever’s drone has kept flying twice a day over the English Channel, according to data by Flightradar24, a website that collects information about aircraft traffic. On one occasion, on August 4, Tekever’s drone criss-crossed the sea between Dover and Calais for over 21 hours.

More of this might be coming soon, since the MCA has made it clear that it plans to add more unmanned vehicles to its fleet, according to a BBC report from May 2020. That goes beyond the Elbit System programme. A tweet sent out from the Agency’s Twitter account on July 31 showed a MCA-liveried surveillance dronedesigned by Austrian company Schiebel flittering over North Wales in what the post described as “an operational evaluation”.

Tell a friend:
The UK is Spending Big on Migrant-Tracking Drones to Surveil the Seas