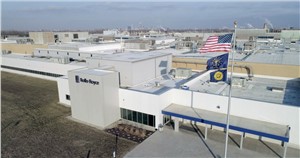 Rolls-Royce North America Inc. has been named a winner of the Defense Counterintelligence and Security Agency (DCSA) 2020 Cogswell Award for Outstanding Industrial Security Achievement in the United States.

The 2020 award winners comprise a select list of 61 facilities managed by companies and other organizations in the U.S., identified from a total pool of approximately 12,500 facilities within the National Industrial Security Program. The DCSA is an agency of the U.S. Department of Defense and is the largest counterintelligence and security agency in the federal government.

The Cogswell Award honors companies that demonstrate sustained excellence and innovation in their overall security program management and that far exceed basic requirements of the National Industrial Security Program. The award also recognizes companies for providing leadership in achieving and sharing best practice with other facilities.

Stan Borgia, Rolls-Royce North America, Vice President of Corporate & Defense Security, said, “It is an honor for Rolls-Royce North America to win the prestigious Cogswell Award from the Defense Counterintelligence and Security Agency for delivering outstanding industrial security. This recognition from DCSA reflects the focus and determination of Rolls-Royce employees to ensure we maintain the highest standard of industrial security.”

The award was established in 1966 in honor of the late U.S. Air Force Col. James S. Cogswell, the first chief of industrial security within the Department of Defense. Cogswell was responsible for developing the basic principles of the Industrial Security Program, which includes an emphasis on the partnership between industry and government to protect classified information.