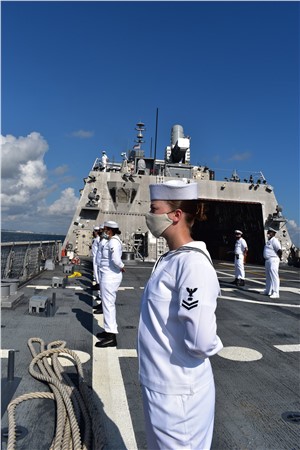 After leaving from the shipyard in Marinette, Wis., St. Louis will officially join the fleet in August when it is commissioned in Mayport.

“After a long journey from Marinette, we are excited to bring St. Louis home to Mayport. The crew’s skill, hard work and perseverance saw her safely through one of the most difficult navigational challenges any ship can experience,” said Cmdr. Kevin Hagan, commanding officer, St. Louis. “To say I am proud of this crew would be an understatement!”

Homeported in Mayport as the Navy’s 22nd littoral combat ship and the 10th Freedom-variant, St. Louis was designed for operation in near-shore environments yet capable of open-ocean operation, to defeat asymmetric "anti-access" threats such as mines, quiet diesel submarines and fast surface craft.

The St. Louis, designated LCS 19, honors Missouri’s largest city. It is the seventh ship to bear the name.

The first St. Louis was a sloop of war commissioned in 1828. It spent the majority of its service patrolling the coasts of the Americas to secure interests and trade. In addition, it served as the flagship for the West Indies Squadron working to suppress piracy in the Caribbean Sea, the Antilles and the Gulf of Mexico region.

As part of the surface fleet, LCSs have the ability to counter and outpace evolving threats independently or within a network of surface combatants. Paired with advanced sonar and mine-hunting capabilities, LCSs provide a major contribution, as well as a more diverse set of options to commanders across the spectrum of operations.

As an LCS Mine Countermeasures (MCM) Mission Package (MP) ship, St. Louis will have MCM operations through the employment of aviation assets and unmanned surface, semi-submersible and submersible vehicles that are equipped with an array of sensors and systems to detect, localize and neutralize surface, near surface, in-volume and bottom mines. These systems are designed to be employed while the LCS remains outside the mine threat area. The MCM MP also provides the capability to sweep mines, detect beach zone and buried mines.

“The St. Louis crew has been working diligently with our LCS shipbuilding team and industry partners to deliver LCS 19 to the Navy, and sail her from Wisconsin to Florida,” said Capt. David Miller, commodore of Littoral Combat Ship Squadron Two. “We are excited to add the 9th LCS to the Mayport waterfront, and look forward to formally placing her in commission next month.”