Airbus Transforms A330s Into MRTTs Through an Optimised Conversion Process 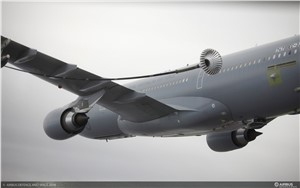 Having earned their reputation as the new-generation aerial tanker of choice for military services worldwide, Airbus’ A330 Multi Role Tanker Transports (MRTTs) are now being outfitted for their multi-mission duties in an optimised industrial process – enabling five aircraft to undergo the conversion every year.

The A330 MRTTs are based on Airbus’ popular A330 widebody passenger airliner, with the aircraft produced on the company’s commercial airplane final assembly line in Toulouse, France. Once their initial built-up is complete, they are flown to Airbus’ military aircraft facility in Getafe, Spain to be transformed with hardware and systems for their dual roles as an air-to-air refuelling platform and an airlifter for troops and cargo.

Thousands of new parts integrated
During the conversion, Airbus teams install some 16,000 types of new components and approximately 450 new electrical harnesses (for a total cabling length of more than 50 km.), as well as 6,000 brackets and 1,700 connectors.

With 42 A330 MRTTs delivered to date, Airbus’ has reduced the end-to-end transformation time by one month, introducing increased digitalisation and applying the “takt” principle of lean production methodology – in which the aircraft moves through the conversion with zero hours pending and zero work orders open.

The digitalisation includes the increasing use of Microsoft HoloLens mixed reality headsets instead of computer tablets. With 80 to 90 work orders now produced with HoloLens, the goal is to apply the system during 2020 for 50% of overall work orders, mainly for electrical and hydraulic installations.

A key element of the conversion is installing the A330 MRTT’s air-to-air refuelling hardware. All aircraft are equipped with hose and drogue units, and most customers have opted for Airbus’ highly capable fly-by-wire Aerial Refuelling Boom System (ARBS) – which provides enhanced controllability during in-flight fuel transfers to receiver airplanes.

The A330 MRTT transformation process includes locating the Airbus-developed Air Refuelling Console in the cockpit area behind the pilots. Containing seats for two crew members, this station enables the aerial refuelling to be remotely controlled, aided by an advanced high-resolution observation system with panoramic 3D-vision for operations day and night.

On the A330 MRTT’s main deck, the aircraft’s widebody cross-section can be configured for a variety of roles, from the transportation of troops and personnel with capacities for 268 passengers in a two-class configuration, to aeromedical evacuation – accommodating two intensive care units, 16 stretchers, along with seating for medical staff and passengers.
A330 MRTT Airbus cabin static display at Paris Airshow 2019 - Day 3 The A330 MRTT – seen here on Airbus’ static display at the 2019 Paris Air Show – is a combat-proven tanker with unique multi-role capabilities

Customers from around the world
Airbus delivered its initial A330 MRTT in December 2009, with this no. 1 aircraft received by the Royal Australian Air Force. Today, A330 MRTTs are flown by Australia, France, Singapore, Saudi Arabia, South Korea, the United Emirates and United Kingdom – logging a combined total of more than 200,000 flight hours.

A total of 60 A330 MRTTs have been ordered for operations at the service of 13 nations.

Tell a friend:
Airbus Transforms A330s Into MRTTs Through an Optimised Conversion Process