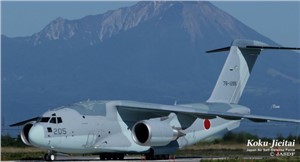 The JASDF C-2 is positioned as a key strategic aircraft for “mobile/deployment capability” which is a part of Japan’s “Priorities in Strengthening Core Elements of Defense Capability”. In 2003, the CF6-80C2 was selected to power this important platform and GE actively worked with JMOD and Kawasaki Heavy Industries, Ltd. to develop a large indigenous transporter.

In alignment with the initiative of the JMOD to optimize acquisition program and cost reduction efforts, GE Aviation has continued to work with JMOD to exercise a consolidated procurement of CF6 propulsion systems over the last few years. As a result, JMOD successfully obtained the budget for the initial 12 units for the JFY2020 contract. With this contract, JMOD expects acquisition cost reduction by as much as 4.8 billion Japanese Yen (USD $44.6 million). GE Aviation will continue to work with JMOD for the remainder of their propulsion system requirement for the forthcoming years. (Editor: Li Xinyang, Photographers: Xu Bingnan and Wang Jiliang)