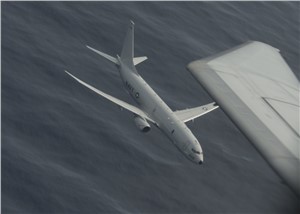 “It is a first time “break-out” where a small business will be responsible to manage the repair/upgrade and overhaul of 362 commercial common weapon replaceable assemblies (WRAs) used in support of the P-8A Poseidon Maritime aircraft,” said Debra Zaslow, Contracting Officer for PBL Center of Excellence.

These items have been deemed “commercial common,” or items that can be used on both the P-8A, as well as, the Boeing 737 aircraft and were previously repaired primarily by large business Original Equipment Manufacturers (OEMs).

Since these 362 items are identical to the ones used on the Boeing 737, it was decided by the NAVAIR Program Office that items could be repaired at various Federal Aviation Administration (FAA) Part 145 Repair Stations.

“These are the large nation-wide and world-wide networks of repair facilities used by airlines and other private aircraft, all of which are governed by FAA regulations,” said Zaslow. “S&K Aerospace has in-depth knowledge of Federal Aviation Administration (FAA)-governed repair processes, infrastructure and regulations.”

This is the first time that NAVSUP WSS has procured repairs/upgrades/overhauls from approved Federal Aviation Administration 145 Repair Stations. As the prime contractor, S&K Aerospace will be responsible for maintaining all items under this contract and coordinating the necessary repair work to return items to ready for issue (RFI) condition via repair stations.

NAVSUP WSS is one of 11 commands under Commander, NAVSUP. Headquartered in Mechanicsburg, Pennsylvania, and employing a diverse, worldwide workforce of more than 22,500 military and civilian personnel, NAVSUP's mission is to provide supplies, services, and quality-of-life support to the Navy and joint warfighter.