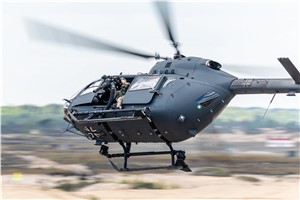 With Hungary recently receiving three additional H145Ms in May 2020, this light-attack, four-tonne helicopter seems poised for action this year. Here’s a look at how customers like Luxembourg, Serbia, the Thai Navy, the German Bundeswehr and the Hungarian Defence Forces are introducing their first units into operation.

H145M: Creating a top-performer
When Airbus Helicopters wanted to fill the market need for a capable, cost-efficient answer to new global security threats, it looked to its H145 programme. Successful in various segments, best-in-class for law enforcement, with an availability rate of more than 90%, the H145 was the obvious platform to start with.

They created a top-performer. The H145M, the military version of the compact twin-engine combines agility, performance and ruggedness. It soon will come in the five-bladed version being developed for its civil counterpart, with benefits in maximum takeoff weight and handling. Advanced technology gives it the quietest sound footprint in its class.

Beyond these enhancements, the manufacturer went further, achieving a truly versatile battlefield performer. The modular HForce weapons system enhances its mission capability, with a multi-purpose mission computer and a range of weapons. Moreover, its ability to be deployed rapidly via strategic airlift assets is a strength.  It fits into the A400M and the C17 – from which it can engage in everything from SAR to battlefield utility, reconnaissance, and assault fire support and attack missions. All this, while integrating with current data links for communication and coordination, making it a multi-role asset.

Demand from all quarters
Since its launch, with 15 H145Ms to the German Armed Forces (Bundeswehr) from 2015 onwards, the helicopter’s customer base has grown to include Luxembourg with two aircraft, Serbia with nine, the Thai Navy with five and Hungary with 20 aircraft.

First deliveries followed in quick succession. At the Partner Defence Exhibition in June 2019, Serbia received its first H145M, to be operated by the Air Force and the Ministry of Interior. In November, the first of two aircraft for defence and security missions were delivered to the Government of the Grand-Duchy of Luxembourg. Later in the month, two H145Ms were delivered to the Hungarian Defence Forces, while in December the German Bundeswehr received the first out of seven H145s in Light Utility Helicopter Search and Rescue configuration (LUH SAR), which carries high-performance cameras, searchlights, emergency beacon locator systems, a full suite of medical equipment, rescue winches and load hooks.
The H145M is the answer to today’s most demanding operations for which high versatility, high performance and cost effectiveness are needed.

“Operating an H145M is much easier than operating the models having been in service in Hungary so far, because it is fully digital, and computer-controlled.” Lieutenant-colonel Zsolt Simon, Chief of Flight Training Department and acting deputy commander of the HDF 86th Szolnok Helicopter Base (Hungary)

An expanding portfolio of missions
Following this spate of deliveries, the H145M is coming into its own in 2020, generating positive reviews. Hungarian Defence Forces pilots have flown some 200 hours of conversion training in the new aircraft, whose digital, computer-managed cockpit creates a modern and efficient environment. “Operating an H145M is much easier than operating the models having been in service in Hungary so far, because it is fully digital, and computer-controlled,” said Lieutenant-colonel Zsolt Simon, Chief of Flight Training Department and acting deputy commander of the HDF 86th Szolnok Helicopter Base.

They also noted a different, more digital approach to the H145M’s maintenance, commenting on a time savings when inspecting the aircraft and prepping it for flights. “It is much easier and more modern to operate these helicopters than the old ones. Even the physical job takes much shorter time when, for example, the helicopters need to be prepared, detected for defaults or when following an error process,” said Maj. Tamás Bagi, commander of the H145M maintenance squadron.

The helicopter’s mission capabilities have also suggested possibilities for armament, as in Serbia, where domestically-produced weapons are being integrated on the country’s H145Ms, together with the Airbus HForce targeting and mission management system. Field trials of unguided S8 80mm rockets were reported in December in northern Serbia, ahead of the completion of the fleet’s armament, and the air force’s H145Ms were slated to be equipped with a 12.7mm podded machine gun.

Further, the German Bundeswehr’s training of Nigerian special forces soldiers in the Sahel region of the Sahara, which has taken place since 2020, marked the first time the Bundeswehr used the new H145M LUH SOF (Special Operations Forces) version to train Nigerian paratroopers, a demonstration of its rapidly expanding portfolio of missions.

Sterling qualities
To explain the growing interest, the helicopter’s pedigree offers a clue. The H145 is a cost-efficient, mature programme with experience in delivering orders with just a year and a half lead time. A performance-based support set-up contributes to a high level of availability; the H145Ms of the Bundeswehr have seen the fleet at 99% mission readiness. The programme’s maturity also means spare parts and maintenance are well in hand.

“The H145M has shown its qualities in some of the most challenging missions. The deliveries to our newest customers are a confirmation that we are making a helicopter that exceeds expectations and delivers what they want in a military aircraft.” Axel Humpert, Head of the H145 programme at Airbus Helicopters