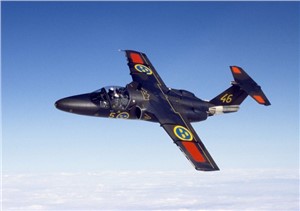 Saab has extended its support and maintenance agreement with the Swedish Armed Forces regarding the SK60 trainer aircraft, which is used for pilot training. The contract is valid from 1 July 2020 up to 2025, with 2026 as an optional year. The initial order value amounts to MSEK 875.

The extended support agreement means that Saab will continue to serve as primary supplier, and is responsible for the operation, maintenance, and availability of all SK60 aircraft at the Swedish Armed Forces. The commitment calls for Saab to ensure that the system is airworthy and readily available for Swedish Air Force Wings as per the Swedish Armed Forces’ requirements. The agreement is a continuation of a similar contract signed in 2015.

“This contract ensures that the Swedish fighter pilots continue to get really good training, due to the Air Force’s SK60 fleet being available for several years to come,” says Ellen Molin, Head of Saab’s Support and Services business area.

SK60 is the Swedish military designation for Saab 105, a twin-engine jet aircraft which undertook its maiden flight in 1963 and which has been used in the Swedish Armed Forces, primarily for training purposes, since 1967.