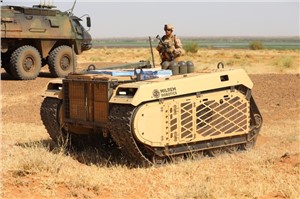 The THeMIS was initially deployed to Mali with the Estonian Defence Forces (EDF) during a French lead counter-terrorism operation in April 2019.

Up until April 2020, the vehicle was regularly used during patrols by Estonian soldiers and for transporting supplies within their base. Altogether three Estonian platoons utilized the vehicle during their deployments.

„Partitioned urban areas can be challenging, and one cannot always depend on APC support. The opportunity to bring along a half-ton of ammunition and water to places unreachable with an APC added great value to patrols and enhanced combat capability,” said Lt Col Sten Allik, Senior Staff Officer of the Estonian Defence Forces .

“The THeMIS surprised us with its ability to withstand the tough environment. The heat and harsh terrain put the vehicle to the test; however, it passed with ease,” Allik added.

During the deployment, the THeMIS traversed 1200 km in one of the world’s harshest terrains of lava rock soil and climates climbing to 50 degrees Celsius in the shade. The UGV was operational for over 330 hours.

“We collected a lot of valuable data and feedback during the deployment and although EDF’s experience with the THeMIS was positive, there is always room for improvement,” said Kuldar Väärsi, CEO of Milrem Robotics . “However, after this experience in Mali, we are confident that the THeMIS is more than capable of supporting operations in extremely hot climates,” Väärsi added.

In the future the EDF would like to utilize the THeMIS together with additional ISR, communication support, jamming, and remote weapon system capabilities. “The possibility to detect and neutralize the enemy or an explosive device from a distance is a crucial capability. It is easier to risk the vehicle than a human life. If we can reduce the risk to life in combat situations, we can increase operational speed,” Allik said.

Milrem Robotics will continue to support the EDF in mission areas in the future and is currently preparing for possible future deployments as early as the end of 2020.