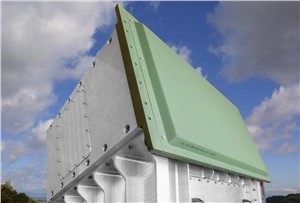 “Traditionally, the SRR and PDR take place several months apart, but thanks to Lockheed Martin’s (NYSE: LMT) preparation, investment and our technically mature radar solution, we are able to support the Army’s need to field the system more rapidly,” said Mark Mekker, director, Lockheed Martin Army radar programs. “We have achieved every milestone while working on a very aggressive timeline in order to deliver the radar on schedule.”

Lockheed Martin’s open scalable radar architecture is the cornerstone of the radar system’s design and will allow for future upgrades that not only extend the life of the radar, but address threats to our warfighters that will evolve over the next 40 years.

Proven Radar Experience
With broad and deep experience developing and delivering ground-based radar solutions to our customers, our high-performing, high-reliability, solid state radar (SSR) systems specialize in counter target acquisition, early warning, situational awareness, and integrated air and missile defense. Our radars are designed with the highest degree of commonality and fully integrated SSR systems. They can operate in all environments, are available in highly mobile configurations, and are deployed worldwide. It’s why Lockheed Martin’s ground-based radars are the choice of more than 45 nations on six continents.