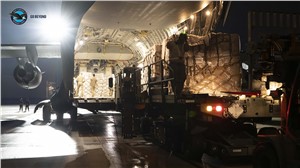 “The C-17 delivers unrivaled mission and crew support, enabling medics to provide unsurpassed aeromedical evacuation to not only our nation’s wounded warriors, but to transport the critically sick, ill and injured around the globe,” said U.S. Air Force Maj. Catherine Ortega of Pope Field, North Carolina.

Here are five recent C-17 missions that have contributed to the global coronavirus response.

The U.S. Air Force evacuated two premature babies in need of intensive care aboard a C-17 from Osan Air Base in South Korea to Joint Base Andrews in Maryland. The twins were then transported to Walter Reed National Military Medical Center for advanced neonatal care available to military families at the facility.

The U.S. Air Force also utilized C-17 aircraft to transport two shipments—each containing approximately 500,000 test swabs and other supplies—from Aviano Air Base, Italy, to Memphis International Airport, Tennessee, a FedEx hub. From there, the supplies were transferred to commercial aircraft to be distributed to medical facilities across the United States.

NATO Strategic Airlift Capability has deployed allied C-17 aircraft on three missions, each carrying 45 tons of medical supplies, including over 100,000 protective suits. The shipments were transported from the Republic of Korea to Bucharest airport as part of the effort to ensure Romania (a NATO ally) is equipped to respond to the coronavirus pandemic.

The Indian Air Force flew two recent missions aboard C-17 aircraft. In one mission, the IAF few from Hindon Airport in Ghaziabad to the Iranian capital city of Tehran to evacuate Indians stranded in coronavirus-affected Iran. A medical team and support staff was onboard the flight.

Another mission involved an IAF C-17 that carried 15 tons of medical supplies from India to Wuhan, China. The aircraft then transported 112 Indians and foreign nationals back from Wuhan to Delhi.