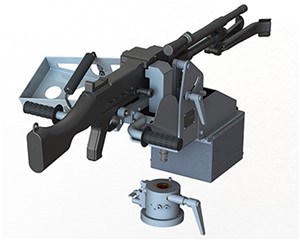 The report "Weapon Mounts Market by Mount Type (Turret, Coaxial, Fixed, Pintle/Pedestal, RWS, Swing Arm, Monopods, Bipods, Tripods), Platform (Ground, Naval, Airborne), Mode of Operation, Weapon Compatibility, and Region - Global Forecast to 2025", is projected to grow from USD 1.1 billion in 2019 to USD 1.8 billion by 2025, at a CAGR of 7.7% from 2019 to 2025. The growth of the market can be attributed to the increasing procurement of armored vehicles, rotorcraft, machine gun,and aircraft by militaries globally, and ongoing modernization of naval platforms by various countries among others.

Based on platform, the naval segment is projected to lead the weapon mounts market during the forecast period.
Based on platform, the market is projected to be led by the naval segment from 2019 to 2025. This segment is expected to grow during the forecast period due to factors such as the continual upgrades of weapon systems on ships such as destroyers, frigates, and corvettes, among others. Additionally, the procurement of new battleships by countries such as India, China, the US, and Saudi Arabia, among others, is also driving the market for naval weapon mounts.

Asia Pacific is projected to be a high growth market for weapon mounts during the forecast period.
The weapon mounts market in Asia Pacific is projected to grow at the highest CAGR during the forecast period. Various border disputes between countries such as China, India, Pakistan, Afghanistan, North Korea, and South Korea, among others, are driving these countries to increase their investment in defense technology, which includes the procurement of armored vehicles, combat aircraft, naval ships, and weapons for soldiers, among others.

In 2020, FN Herstal secured a contract worth USD 110 million for the supply of 2,620 FN SCAR H PR rifles from the French Ministry of Defense under its Fusil de Précision Semi-Automatique (Semi-Automatic Precision Rifle, FPSA) program. The contract includes the supply of a total of 2,620 rifles with day sights and accessories such as bipods and suppressors.

In 2018, ISTEC Services Ltd. secured a contract worth USD 334,870 for the supply of weapon mounts to the Canadian Ministry of Defense.

In 2018, Leonardo S.P.A signed a contract with the German Federal Agency for Military Procurement (Bundesamt für Ausrüstung, Information Technology and Nutzung der Bundeswehr) for the supply of seven OTO 76/62 systems (Super Rapid version) to equip the K130 corvettes of the German Navy.