Next phase of Next Generation Jammer Mid-Band Awarded 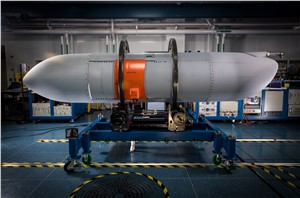 Raytheon Company (NYSE: RTN) was awarded a $403M System Demonstration Test Articles contract with the U.S. Navy for Next Generation Jammer Mid-Band. The SDTA pods will be delivered to the fleet once developmental and operational testing is complete.

"These test assets will be used to show NGJ-MB is ready for operation," said Dan Theisen, director at Raytheon Electronic Warfare Systems. "We're at the stage where testing is essential. The test program is on target to meet Initial Operating Capability in 2022."

NGJ-MB provides significantly improved radar and communication jamming performance and capacity, as well as improved reliability and maintainability, for EA-18G Growler crews. Commanders will use NGJ-MB to deny, degrade and deceive the enemy's use of the electromagnetic spectrum through advanced jamming techniques.

Raytheon delivered the first NGJ-MB pod to the U.S. Navy for testing in July of 2019.

Tell a friend:
Next phase of Next Generation Jammer Mid-Band Awarded