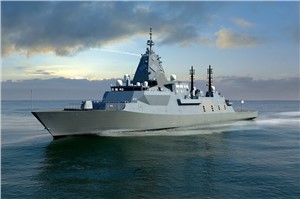 ­­­The State Department has made a determination approving a possible Foreign Military Sale to Australia of long lead items, engineering development activities, and other defense services to support the Australian Surface Combatant Program for an estimated cost of $1.5 billion.  The Defense Security Cooperation Agency delivered the required certification notifying Congress of this possible sale on yesterday.

This proposed sale will support the foreign policy and national security objectives of the United States.  Australia is one of our most important allies in the Western Pacific.  The strategic location of this political and economic power contributes significantly to ensuring peace and economic stability in the region.

The proposed sale will enhance Australia's Surface Combatant capability by modernizing their existing three AEGIS capable Hobart Class Destroyers with the latest technology and capability, and delivering the first three (of nine) AEGIS capable Hunter Class Future Frigates.  This sale enhances Australia's self-defense capability, while significantly improving interoperability with U.S. Navy AEGIS combatants in the region.  By deploying a surface combatant fleet that will incorporate Cooperative Engagement Capability (CEC), Australia will significantly improve network-centric warfare capability for US forces operating in the region.  Australia will have no difficulty absorbing this equipment into its armed forces.

There are a significant number of companies under contract with the U.S. Navy that will provide components and systems as well as engineering services during the execution of this effort, with a significant portion of the effort to be performed by Lockheed Martin, Rotary and Mission Systems, Moorestown, NJ.  There are no known offset agreements proposed in connection with this potential sale.

Implementation of this proposed sale will require travel of U.S. Government and/or contractor representatives to Australia on a temporary basis for program support and management oversight.  No extended (long-term) visits to Australia will be required as part of this effort.