Raytheon, Major Tool and Machine team up on SPY-6 Radars

Partnership Extends Through Production and Sustainment 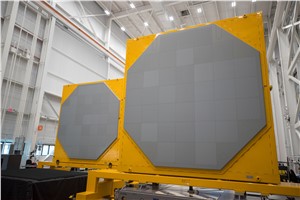 SPY-6 is a family of next-generation, integrated air and missile defense radars that is being installed on more than 50 ships across seven Navy ship classes.

"Major Tool's array structures will literally serve as the foundation upon which we build the U.S. Navy's most advanced radars," said Paul Ferraro, vice president of Raytheon's Seapower Capability Systems business. "Our team of industry-leading partners is ready to deliver SPY-6's unmatched, multi-mission capability to the surface fleet."

Since its inception in January 2014, the Raytheon-led SPY-6 program has met all 20 milestones, ahead of or on schedule. The radar has a track record of performance, demonstrating its multi-mission capabilities against an array of single and multiple, simultaneous targets throughout the Navy's extensive testing program.

AN/SPY-6(V) remains on schedule for delivery to the first DDG 51 Flight III, the future USS Jack H. Lucas (DDG 125). The first delivery of AN/SPY-6(V)2 to LHA 8, the USS Bougainville, an America Class Amphibious Assault Ship, is on plan for 2021.

Tell a friend:
Raytheon, Major Tool and Machine team up on SPY-6 Radars