Eurofighter Takes Off at HX Challenge 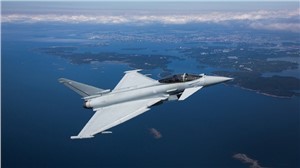 The trials are being run as a key part of the ongoing HX programme, the competition being run by the Finnish Defence Forces to replace the country’s existing F/A-18 fleet. For the next five days, Eurofighter aircraft from the UK Royal Air Force will be put through their paces in a series of evaluations in the cold conditions of Tampere.

Eurofighter will be tested under cold weather conditions to verify the performance claims made in the responses to the Request for Quotation documents submitted in last year, along with performance values previously verified in laboratory tests.

The trials programme will enable the Finnish Air Force to assess the performance of each aircraft, systems and sensors in the Finnish operating environment. The Eurofighter trials will be led by air crew from BAE Systems' Flight Operations team, led by Chief Test Pilot, Steve Formoso and test pilot Luke Gili-Ross.

Mr Formoso said: “We believe Eurofighter meets every operational requirement of the Finnish Air Force today and is already optimised to defend Finland for many decades to come. There are close to 500 Eurofighters in Europe and, through that, we have demonstrated the aircraft can operate in the most difficult and demanding of conditions.

“For example, Eurofighter provides to the defence of the Falkland Islands from RAF Mount Pleasant in the South Atlantic, operating some 13,000km away from 'home' bases in the UK. On top of that, Eurofighters from across the European air force regularly undertake NATO Baltic Air Policing and over their own airspace.”

Paul Hitchcock, Managing Director, BAE Systems Finland, said: “Eurofighter has a proven pedigree of operating wherever and whenever it is needed, no matter what the conditions, and we are very much looking forward to demonstrating those capabilities as part of the HX Challenge.

“But this proven operational capability is only one element of what Finland requires for its investment. HX must contribute to deepening Finland’s security, political and industrial ties and we believe the combined strength of Eurofighter, the only true European offer for the HX programme, delivers this.

“The HX fighter acquisition programme presents Finland with a unique opportunity to take control of its own security, defence and industrial future. By choosing Eurofighter, the Finnish Air Force would not only be acquiring the most advanced multi-role aircraft on the market, and one proven in service across the globe, it would be choosing everything Finland needs to independently operate, maintain and control its own aircraft – here in Finland, however it wants.”

Tell a friend:
Eurofighter Takes Off at HX Challenge