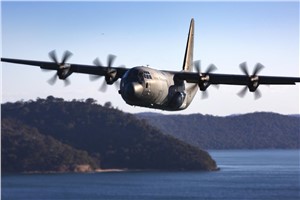 “Maintaining effective defences against these prolific and increasingly sophisticated weapons is essential to the safe operation of the aircraft.

“Defence has been able to complete this critical upgrade three months earlier than projected, and under budget by $146.85 million.”

“Eight of the twelve aircraft were modified in Australia by Airbus Australia Pacific under a local commercial licencing arrangement,” Air Commodore Green said.

“CAE Australia has also modified the C-130J Full Flight Simulator to reflect the changes to the aircraft.”

Logistics and operational support infrastructure has been constructed at RAAF Base Richmond, including a laser test firing facility, secure storage in compliance with Defence’s obligations under International Traffic of Arms Restrictions, and an updated air base security system.