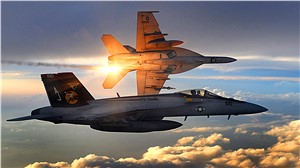 “A key component to this program has been the great collaboration between PMA-205, range users and our teammate Leonardo DRS,” said Nick Gibbs, vice president and general manager, Simulation and Training Solutions for Collins Aerospace. “The new system will bring a heightened sense of realism to train our service men and women to be better prepared for emerging threats and situations.”

TCTS Inc. II, originally awarded to Rockwell Collins in 2017, enables the rapid adaptation of new missions and threats into training as well as enabling joint and coalition interoperability with fourth and fifth generation aircraft platforms. The ability for the Navy and Marine Corps to rapidly advance future technology insertions is due to Collins Aerospace’s open architecture design and the use of industry standards including alignment with the FACE™ Technical Standard. The system will also be exportable for coalition and NATO countries.