Could autonomous vehicles save the lives of forces personnel? This was just one of the questions being answered during a joint experiment recently between the UK and US Armed Forces. 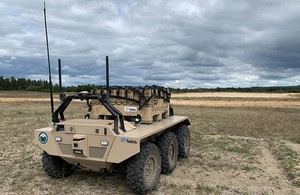 It’s the first time these British-designed autonomous systems have been operated and demonstrated in the US and is the culmination of a three year collaboration between coalition forces and technologists which has seen the testing of a range of driverless vehicles and novel unmanned aerial systems.

"This has been a journey in understanding, not only how to integrate technically the different capabilities, but importantly to help the British and US Armies understand and develop the potential concepts of use, tactics and procedures together in the representative battlefield environments. We have gained hugely valuable insights into the reliability and maturity of ‘state of the art’ technology and how to operate these systems as a UK/US coalition. This is about two major Western partners working together to make future battlefield operations less risky, more effective and efficient."

Delivering supplies to the front line is dangerous and often relies on manual delivery through troops moving backwards and forwards under fire. This experiment shows how unmanned systems will potentially allow the distribution of supplies directly to forward combat areas with fewer personnel at risk and to allow them to concentrate on winning the battle. During the Afghanistan conflict, UK and US troops were injured or killed while trying to deliver convoy logistic patrols. Innovative autonomous systems technologies could allow these missions to take place with fewer soldiers exposed, resulting in fewer casualties and freeing up troops to join the fight and increase the firepower.

"CAAR is a great example of successful US/UK Science and Technology and warfighter collaboration. Over three years of trials and experimentation CAAR has rapidly developed the Army’s thinking around the use of autonomous capability within an information-led, integrated and technology-enabled supply chain. Exploitation into the Army’s core Combat Service Support modernisation and transformation programmes is now a priority and we’ll seek opportunities for collaborative capability development where it makes sense to do so."

During the Michigan experiment, a multi-vehicle fully integrated UK/US convoy was operated, with the lead vehicle in various modes, including controlled semi-autonomously through the use of designated waypoints, with the following vehicles operating only from data sent by the lead vehicles and their own sensors. Researchers used UK and US tactical resupply vehicles together in the convoy, with both sets of vehicles being equipped with the US research centre’s autonomous technology. During the final end-to-end demonstration event, robotic and autonomous systems for many parts of the deployment supply chain were showcased; including operation and mission logistic planning tools, robotic and semi-autonomous load handling vehicles, semi-autonomous leader-follow logistic convoy and autonomous ‘last mile’ resupply capabilities.

In three weeks of experimentation prior to the demonstration event, smaller unmanned ground vehicles and unmanned aerial vehicles developed under the UK’s ‘Last Mile Challenge’ were tested, undertaking autonomous delivery missions to remotely deliver a variety of representative payloads including ammunition, food and medical supplies.

Major Andrew Scruggs from the US Army said:

"The collaboration is vital and has been one of truly mutual support and burden-sharing. Both nations have put their expertise and resources together to learn and create new ideas and approaches for Army logistic operations of the future. We have been able to look at the challenges of working with how you take different systems from different nations and different companies and get them all to talk together."