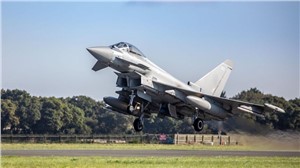 Before flying on to a multi-national exercise in Malaysia at the end of September, the first stop for the multi-role Typhoon jets will be Oman in the Middle East. There, pilots from both nations will test their skills in a two week ‘live’ weapons exercise in the desert.

“The topography and climate of Oman offer ideal training conditions for both the pilots and engineers of 3(F) Squadron ahead of their operational deployment in support of Op SHADER next year,” said Wing Commander Steve Kenworthy, Officer Commanding 3(Fighter) Squadron.

The Royal Air Force of Oman (RAFO), who also fly the Typhoon, has a long history of training with their British counterparts. In recent years this has been under the banner of Exercise Magic Carpet and Exercise Saif Sareea (autumn 2018).

Wing Commander Kenworthy said, “The opportunity to train and socialise with our RAFO colleagues provides an additional exciting and rewarding dimension to the exercise which I am sure will reinforce the strong and profound partnership between the UK and Oman that has endured for many years.”

But it is not just the fast jet pilots who will learn from exercises like Exercise Magic Carpet. It also prepares personnel performing support functions to become familiar with operating in tough conditions away from home. For example, 3 Mobile Catering Squadron from RAF Wittering will keep everyone fed and watered; 90 Signals Unit from RAF Leeming will keep everyone securely connected with IT and communications; and a Voyager air-to-air refuelling and transporter aircraft from RAF Brize Norton will fly personnel there and keep the Typhoons in the air for longer through refuelling.

Experiencing the extreme difference in climate on the ground will be a challenge for all, including a specialist team all the way from RAF Spadeadam in Cumbria. Their job is to ensure the pilots have a target to aim at on the desert floor which can even include inflatable tanks!

RAF Typhoon aircraft are also currently involved in exercise Cobra Warrior (working with European and Middle Eastern partners in the UK) and on Operation Shader. In December 19 the Typhoon Force will also be involved in Ex EPIC SKIES in Qatar. The Typhoon Force is also busy on QRA (Quick Reaction Alert) duties in UK and the Falkland Islands and has just handed over Baltic Air policing duties in Estonia to the Czech Air Force.