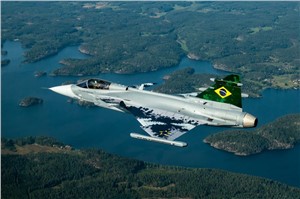 The duration of the flight was 65 minutes and included test points to verify basic handling and flying qualities at different altitudes and speeds. The main purpose was to verify that the aircraft behavior was according to expectations.

“This milestone is a testament to the great partnership between Sweden and Brazil. Less than five years since the contract was signed, the first Brazil Gripen has conducted her first flight,” says Håkan Buskhe, President and CEO of Saab.

This aircraft is the first Brazilian production aircraft and will be used in the joint test program as a test aircraft. The main differences compared to the previous test aircraft are that 39-6001 has a totally new cockpit layout, with a large Wide Area Display (WAD), two small Head Down Displays (sHDD) and a new Head Up Display (HUD). Another major difference is an updated flight control system with updated control laws for Gripen E. It also includes modifications both in hardware and software.

“For me as a pilot it has been a great honour to fly the first Brazilian Gripen E aircraft as I know how much this means for the Brazilian Air Force and everyone at Saab and our Brazilian partners. The flight was smooth and the aircraft behaved just as we have seen in the rigs and simulators. This was also the first time we flew with the Wide Area Display in the cockpit, and I am happy to say that my expectations were confirmed,” says Saab test pilot Richard Ljungberg.

39-6001 will now join the test programme for further envelope expansion as well as testing of tactical system and sensors.