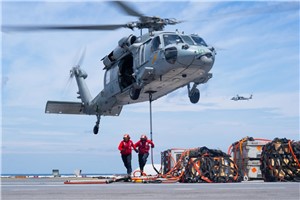 Ike took on approximately 1,200 tons of munitions and ordnance during the multi-day evolution, using a combination of both connected and vertical lifts.

“This is the critical moment when Ike becomes a warship,” said Chief Aviation Ordnanceman Kendrick Barrow, the Quality Assurance Officer for the weapons department.

Barrow said that this event marks a turning point for the crew, especially the weapons department, who has spent nearly the last two years maintaining the ship’s magazines and elevators, training to assemble ordnance, and learning how to operate transportation machinery.

Aviation Ordnanceman 2nd Class Cody Gladden said he was impressed by the event’s smooth execution, given that much of the crew had never taken part in such an event.

“It was very methodical and deliberate,” said Gladden. “It was the perfect atmosphere for us to train up the Sailors who have never seen this kind of onload before.”

Though the spotlight was on weapons department in the execution of this event, both Gladden and Barrow emphasized that the onload wouldn’t have been successful without the hard work and planning of every department aboard Ike.

“From Navigation and Operations, to Supply and Deck, and of course Helicopter Sea Combat Squadron (HSC) 7” said Barrow. “Every hand on this ship played an important role in bringing on such a massive amount of ordnance successfully and safely.”

Barrow said he and his Sailors are eager to move forward into the next phase of operations.

“Now they’re getting to see why we did all of that hard work,” said Barrow. “They’re actually getting to do their job.”

The ammunition onload represents a major milestone for Ike, putting it one step closer to deployment. The ship will next move on to undergoing Tailored Ship’s Training Availability and Final Evolution Problem (TSTA/FEP). After TSTA/FEP, Composite Training Unit Exercise (COMTUEX) will be the final phase before deployment.

“The mighty Ike has come a long way since our time in the yards, and it’s our Sailors who have made it happen” said Captain Kyle Higgins, Ike’s commanding officer. “Thanks to hard work, grit, and determination, we are ready to meet the nation’s call in today’s great power competition.”