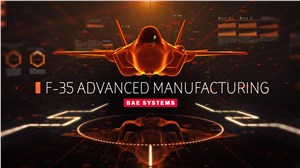 BAE Systems Australia has celebrated the production of the 15,000th titanium part produced at Edinburgh Parks in South Australia for the world’s largest defence program, the F-35 Joint Strike Fighter.

The range of parts produced in Australia have delivered 500 tail sets which, together with the aft fuselage and horizontal tail sets, make up the rear section of each jet which BAE Systems produces across its global enterprise.

BAE Systems Australia supplies F-35 components to both its UK business and to Victorian manufacturer Marand.

Production of vertical tail parts at Edinburgh Parks will continue for another two decades, possibly further depending on global sales of the Joint Strike Fighter aircraft.

Securing decades of work on the global F-35 program has underpinned the company‘s investment in bespoke titanium machining facilities at Edinburgh Parks, which was also supported by the South Australian Government.

As well as manufacturing a range of products for the F-35 Joint Strike Fighter, the company also produces bespoke components for other critically important Defence programs including the Nulka decoy and the Evolved Sea Sparrow Missile.

“We are undertaking very complex and advanced manufacturing in a way that is cost effective and globally competitive.

“Digitisation will be the next big step change to further improve our competitiveness by allowing us to collaborate seamlessly with our suppliers and partners in real time.

“This will mean that we can identify and resolve issues faster, improve risk management and optimise production.”