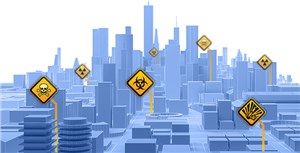 DARPA’s SIGMA program, which began in 2014, has demonstrated a city-scale capability for detecting radiological and nuclear threats that is now being operationally deployed. DARPA is building off this work with the SIGMA+ initiative that is focused on providing city- to region-scale detection capabilities across the full chemical, biological, radiological, nuclear, and explosive threat space.

“The algorithms were developed using a custom simulation engine that fuses multiple detector inputs,” said Anne Fischer, program manager in DARPA’s Defense Sciences Office. “We built the algorithms based on simulant releases in a large metropolitan area – so we took existing data to build the algorithms for this network framework. With this network, we're able to use just the chemical sensor outputs and wind measurements to look at chemical threat dynamics in real time, how those chemical threats evolve over time, and threat concentration as it might move throughout an area.”

Sensors/network tested at the Indianapolis 500, May 2018

The chemical sensor network and the data collected during events such as the 2018 Indianapolis 500 were critical to the DARPA effort, allowing the team to assess the performance of the sensors and network algorithms. These tests were conducted in an urban environment to ensure that the system could handle complex and stochastic signals from species that are ever present in a city’s chemical background. Significantly, the network-level algorithm successfully improved system performance by correctly suppressing false detection events at the individual detector level. The group of DARPA researchers was also able to collect a large relevant data set and valuable user feedback that will guide ongoing system development efforts.

Further testing with safe simulant/concert smoke at Indianapolis Motor Speedway, August 2018
During additional tests in August 2018, a non-hazardous chemical simulant was released in the empty Indianapolis Motor Speedway at a realistic threat rate. Concert fog was also released to serve as a visible tracer. The propagation of the visible tracer was observed in aerial photography, and ChemSIGMA sensors and algorithms determined the release location with unprecedented accuracy. The web-based ChemSIGMA interface allows the user to view alerts in real time across a variety of devices. Multiple trials were conducted over the course of several days assessing performance over a variety of meteorological conditions. Releases occurred during daytime and nighttime with a full range of wind directions and speeds. The ChemSIGMA prototype system detected all of the simulant releases and generated zero false alarms over the course of testing.

Department of Defense simulant testing at Dugway Proving Ground, Utah, October 2018
“We're looking at how we might make this network more robust and more mature,” Fischer said. “For example, we implemented a network at Dugway Proving Ground as part of a DoD test for simulant releases, and have shown that the network can respond to a number of chemical simulant threats different than those used in Indianapolis, as well as built-in capabilities for mobile releases. Over the past few months, the team has used these data sets to further refine the algorithms, and plans to integrate and test them with the ChemSIGMA system in test events scheduled later this year.”

The successful pilot and simulant test of the ChemSIGMA system at the Indy500 and Dugway Proving Ground provided valuable, relevant, and realistic data sets for validation and verification of the source localization and plume propagation algorithms.

DARPA is currently extending the capabilities for networked chemical detection by advancing additional sensor modalities, including short-range point sensors based on techniques, such as mass spectrometry, and long-range spectroscopic systems. As these systems are further developed and matured, they will be integrated into the SIGMA+ continuous, real-time, and scalable network architecture to increase the system’s capabilities for city-scale monitoring of chemical and explosive threats and threat precursors.