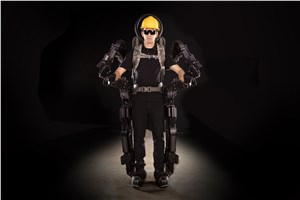 Sarcos® Robotics, a global leader in the production of full-body exoskeleton robots for industrial and military applications, today announced that it has been awarded a second exoskeleton development contract from the United States Air Force.

The first contract, awarded last year, focused on quasi-powered, full-body exoskeleton robots that facilitate lifting up to 80 pound loads. The second contract is focused on a more robust version, capable of lifting up to 200 pound loads, with a specific focus on use cases relevant to Air Force logistics applications.

“We are very pleased to have been awarded a second contract to expand our work with  the United States Air Force,” said Ben Wolff, chairman and chief executive officer of Sarcos Robotics. “The Air Force is leading the charge when it comes to developing next-generation robotics technologies that combine human intelligence with the strength, endurance and precision of machines to serve as a force multiplier while also dramatically reducing the risk of injury. These exoskeletons will be a game-changer for the Air Force.”