Thales D-ILS will provide the equivalent of fixed-based Instrument Landing System capability at tactical airfields and in diverse environments. This is the third USAF order for Thales D-ILS and is the first production unit order. The D-ILS offers significantly improved reliability, maintainability and supportability over legacy deployable precision approach radar systems. 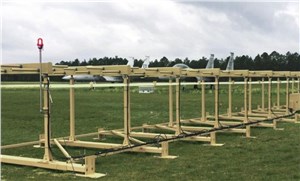 Over the last three years, Thales has received three orders from the USAF under the D-ILS contract. These orders allowed Thales to deliver a total of five D-ILS used by the USAF for initial testing and evaluation. The first Production Unit (PU) will be delivered to the Air Force before next year. Under the program, the Air Force plans to purchase an additional 28 Production Units bringing the total deployable complement to 34.

These systems will be used in airfield environments where the ability to provide precision guidance to aircraft on final approach during low visibility or low-ceiling weather conditions are critical while also being able to quickly set-up, activate, break-down and re-locate.

Thales D-ILS will provide the equivalent of fixed-based Instrument Landing System capability at tactical airfields and in harsh environments such as areas of natural disaster or humanitarian relief efforts. Thales D-ILS is based on the commercial-off-the-shelf Thales ILS 420 – the next generation fixed-based, dual frequency ILS. The D-ILS system can be easily transported via truck, rail or transport aircraft and quickly deployed. More than 700 fixed-base systems have been chosen worldwide for civil and military applications.

Thales Deployable ILS have already been deployed in Italy, Qatar and Mexico.

“With Thales D-ILS, the U.S. Air Force will receive an easily supportable, adaptable and resilient precision approach capability that all joint, coalition and civil ILS-equipped aircraft will be able to use worldwide.” — Tony Lo Brutto, Vice President, Thales ATM US