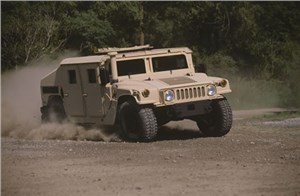 AM General today announced it has secured $57 million in HMMWV contracts and vehicle parts for Iraq, Serbia, Argentina, and the U.S. National Guard and Reserve.

These contracts demonstrate the growing global demand for affordable readiness and reliability offered through the HMMWV family of Light Tactical Vehicles and O.E.M. provided parts.

"These orders are examples of the significant opportunities for our diverse line of world-class Light Tactical Vehicles to include the HMMWV and support business," said AM General President and CEO, Andy Hove. "Our company's priorities are to be agile, flexible and innovative --- able to adapt and be in lock-step with the priorities outlined by our customers."

Hove added, "Our focus is to assure vehicle readiness for our customers, both domestic and international. Just in these past few weeks we have been actively rolling new vehicles off the production line, on to awaiting aircraft and right into theaters of operation, in addition to maintaining and sustaining vehicles to the highest standard. That is the epitome of providing readiness and value for our customers."

Prior to these most recent Light Tactical Vehicle contracts, AM General received a $24,965,954 modification to an earlier foreign military sales contract for an additional 120 M1151A1B1 HMMWVs.

During the past year, the company has seen robust business in its Light Tactical Vehicle lines providing great visibility into a deep pipeline of HMMWV sales for the future.

Just as important, on the U.S. domestic front, the Company continues to perform work under its ground breaking Private Public Partnership (PPP) with the National Guard and Red River Army Depot in the refurbishment and upgrade of older HMMWV models that will continue to be in the U.S. Military fleet for 30-plus years.  Through this innovative PPP program, the Company has already contracted orders totaling nearly $250 million, with a significant pipeline remaining to include $160 million in additional FY2016 funds.