This news is classified in: Aviation Commercial Aircraft Simulation / Training 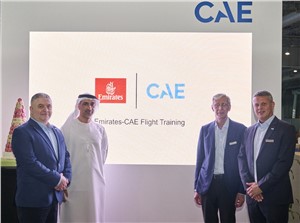 CAE today announced at the MEBAA Show 2022 that it is enhancing its business aviation training offering with the deployment of a new Global 6500 full-flight simulator (FFS) in May 2023 at the Emirates-CAE Flight Training (ECFT) Al Garhoud centre.

The announcement comes as Emirates and CAE celebrate the 20th anniversary of their partnership and the establishment of ECFT in Dubai.

“ECFT’s success is a testament to the strong partnership Emirates and CAE have developed over the past 20 years,” said Nick Leontidis, CAE’s Group President, Civil Aviation. “With the deployment of the new Global 6500 FFS, we are securing ECFT’s reputation for delivering the most advanced business aviation training in the region.”

Steve Allen, Executive Vice President at Emirates Group, said: “Our consistent investment in infrastructure demonstrates our commitment to providing world-class aviation training in Dubai. The addition of another, advanced full-flight simulator to our offering further strengthens our position as one of the world’s leading flight training service providers. We look forward to continuing our successful partnership with CAE.”

20 years of ECFT
Emirates acquired its first simulator, an Airbus A310-300/A300-600R FFS from CAE in 1992, and by 1999 had acquired six additional simulators, including a custom Emergency Evacuation Trainer to meet the needs of the rapidly growing airline.

In 2002, Emirates and CAE entered into a training partnership with the establishment of Emirates-CAE Flight Training (ECFT) and inaugurated a new 12-bay training centre the following year. In 2006, ECFT became a joint venture, providing training to Emirates and a growing number of airlines and business aviation operators in the region.

In 2013, CAE and Emirates opened a second five-bay training centre, and in 2014, doubled its size, substantially growing the region’s pilot and technician training capacity on state-of-the-art simulators ranging from the Hawker 800 to the B737 MAX aircraft FFSs.