Embraer Confirms Binter As the Customer of Five E195-E2 Airc 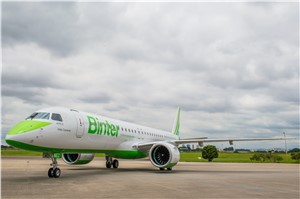 Embraer confirms that Spanish airline Binter is the customer of a new firm order for five E195-E2 aircraft announced this week to be delivered in 2023 and 2024. These aircraft will be added to the fleet of five jets already incorporated as of 2019 when Binter became the first European customer of the E195-E2. The list price value of the contract is US$389.4 million, which will be added to Embraer’s Q4 backlog.

Tell a friend:
Embraer Confirms Binter As the Customer of Five E195-E2 Aircraft Announced This Week